Well, finished the tents yesterday. The last thing they now need is a litlle mud on the underside: 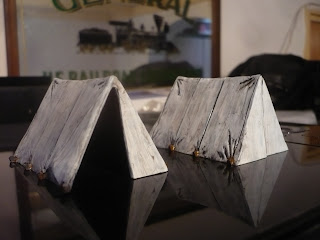 And with a white drybrush: 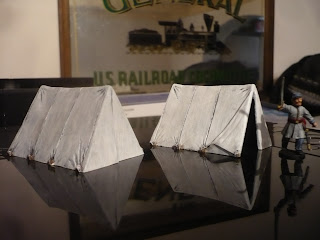 
Today I gave both figures a brown Vallejo wash: 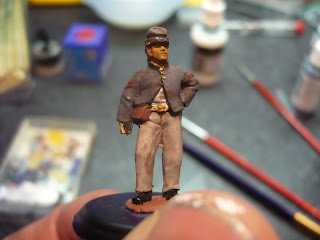 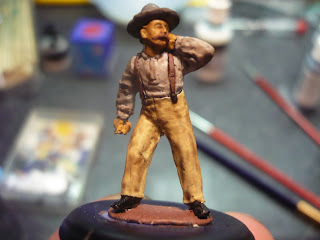 They now have to dry and after that they get their final drybrush to accept the depth parts of the figures.
I als primed the first of two tents: 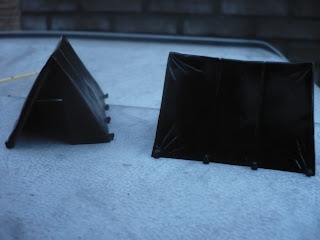 And gave them their first white coat of paint. Accents will be touched-up later:

Today I worked the first layer on these two guys: 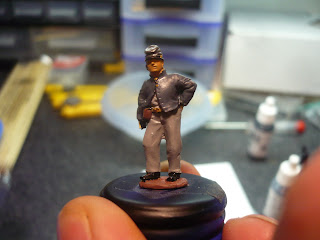 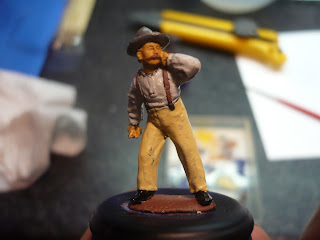 Next the second layer will go on, then the washes.

Today I started the first 2 figures. I pre-paint them with Vallejo Black primer 28012: 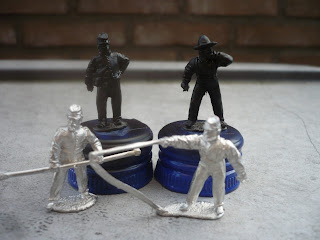 I stick them to a bottlecap withy dubblesided tape I buy in the craft store. This way you can paint them easy and holding them is pretty straight forward.

What do I have in mind?

What is it that I want in this layout? Well, it will be a layout that features two scales; 1:55n3 and 1:87. It will be made switchable during a show, based on the techniques of Iain Rice from England well known from his books and publications in the European and American Press and Hobbymagazines. I "scrabbled" some things on paper. Not very clear but it will give you some idea what I have in mind for this layout: 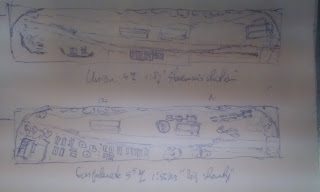 Upstairs 1:87, downstairs 1:55. I will try to make this afternoon a new drawing that will be better to see. Grtz, Ronald.
Gepost door Ronald op 07:14 Geen opmerkingen:

Some 28mm stuff usable for 1:55 and the painting technique

I ordered some stuff last week from Perry Miniatures (http://www.perry-miniatures.com) for the project. The figures are all metal and lookes very good. The tents are plastic and also are good to use. 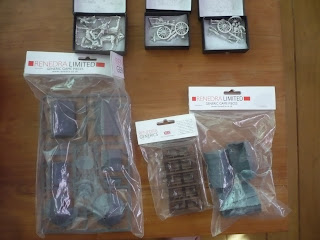 The metal guns and a set of Confederate Generals: 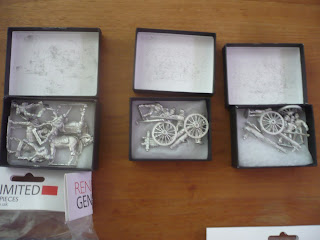 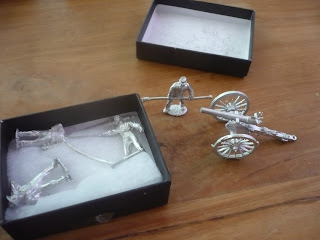 Together with a friend of mine who has a good painting technique we start painting these the 29th of September. We are in a group of modellers who will meet that day. This group has as a purpose to have fun in the hobby and to take it to the next (=higher) level. All have there specialties and I am one of the guys who does American modelling. 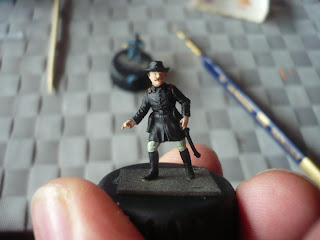 The colours on the uniform: 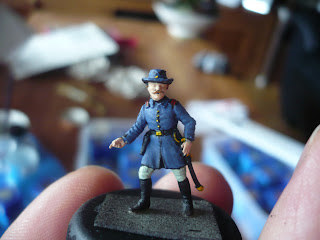 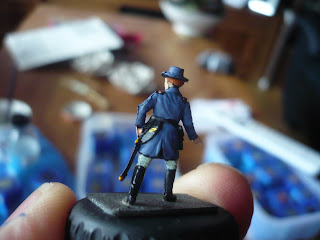 Left mine, right his painted example: 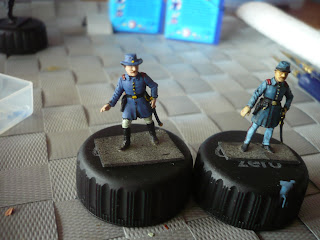 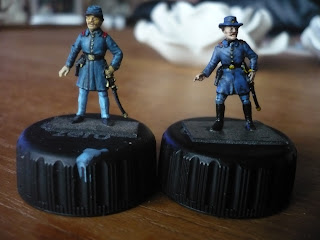 And another one to go: 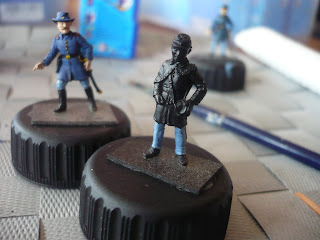 It's not as hard as it seems. So I will go one with the bigger ones.
More to come!

After a longer period some new things.

At this point I can't get enough information about Tenessee and its station.... therefore the subject is no longer available for a good modelled layout. What I'm looking for now is a subject that can be moddeled in the limits of 7 foot long and 1+ foot deep. I build myself 2 modules, one of them was already build in 2009 and was determined to get a same module with it. But for me it is important that a layout is buid for exhibition purpose and that it can be transported easaly. As I have a sedan there is not much room to get a layout stowed in. So what I did was that I made a shorter second module that fits in the trunk of the car and can be coupled to the first one.

The first one can rest on the back seats. On this picture its the left one. The right one is the new 2012 piece that fits nicely to the older 2009 piece: 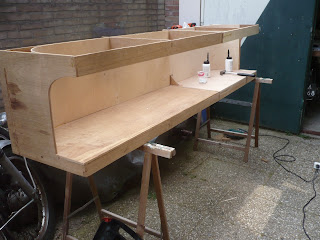 The older one had a cornered background. Until that time I only modelled 90 degree cornered backgrounds and so I wanted to try new things. Unfortunatly it came in storage and wasn't used untill now because I needed something that would fit in a car and not only in a hanger or van (the idea of that is that I can travel "light":  one or two persons and a lyout. Perfect for 1 or 2-day trainshows and the smaller ones. Those have fewer money to organise so expenses are much lesser that when I have to travel to big trainshows where I need a van and 4 to 5 people to operate my layout on these intensive shows.)

The second one is this one: 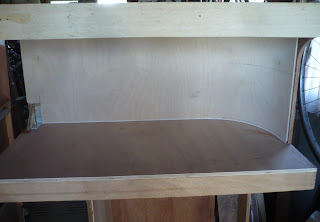 And it fits in the trunk: 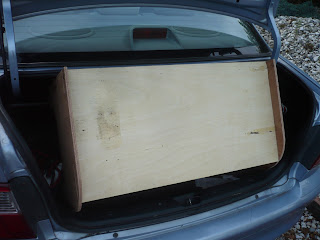 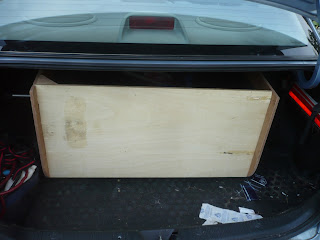 Here are both modules after we finished it with oak veneer and stained it: 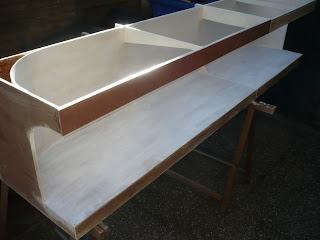 Sorry, picture will not turn in blogspot....: 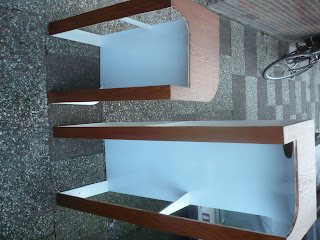 And the two with the first coat of blue background paint: 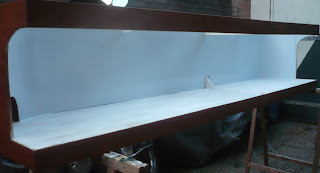 So, here is my base for a American Civil War roadshow in Europe. My plan is to follow a idea of the Englishman Iain Rice who worked out a concept with parts of a layout that can be exchanged with eachother. That means that you can put pieces with different syles of landscaping  in the layout during a exhibition. One example could be different time periodes but also different places.

Later more of it!