Well, after 4 trainshows with 2 layouts in 5 weekends and in 3 countries the season for this year is over. Now I can concentrate on the new layout and start building.

First I'm now in the process of sorting out what I need for the layout. So I made a checklist to do so. But first I made a mock-up yesterday after setting up the 2 modules. It also needed a set of legs for where I used thye set from my other H0 layout " Cornfield Yard". I made it so I can use the set of legs for both layouts. There will be no occassion where both layouts will be in the near future.

The set-up of the 2 modules in my living room. As you see we take care of a little toddler!: 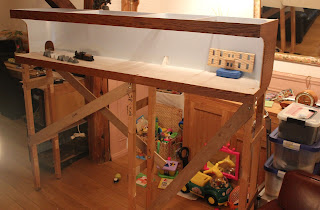 Because of the shorter 2nd module I needed some adaption of the extra studs.

Here I made the first mock-up of how I want the layout. As example I took the Big Shanty part of the video on Youtube from Thom Radice and the photo of the Lacy hotel in the album of Bernard Kempinski's Facebook. These 2 combined let me give a situation where to go from: 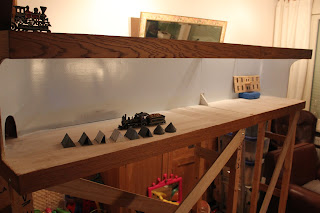 The hotel stands too high but this was for the overview. After that I traced a trackplan onto the modules. On Thom's layout there are 3 spurs but here that would be too much. On the left part I draw 2 spurs from left to right with a extra (probably) non-existing extra spur for staging cars behind the building and watertower that will be place there. I also want the camp before the tracks in the foreground as he did. It looks good this way and gives the layout some depth it really needs: 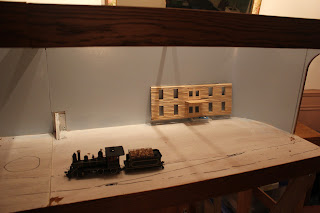 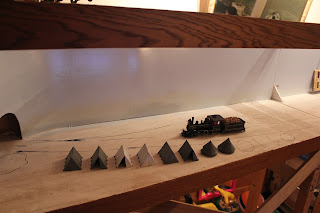 Later on in the evening a found that the 3rd spur was too close to the background so I draw the 3rd spur before the Lacy hotel on the right module. The same time I downloaded some nr 6 templates from Fast Tracks, printed them out and placed them loose on the module: 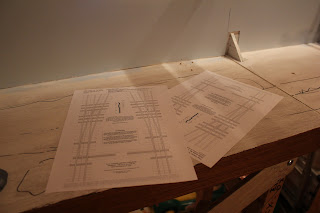 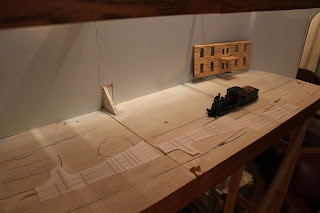 So this will be the idea. It is a lot shorter than on Thom's layout but I want the total picture to be good and correct for the timeperiod modellled. Okay, I know the gauge isn't correct but I think I can make it look reasonably good enough! On the left I will model a sort of sector plate outside the module for switching of the layout.