Today I started the laying of the rail. First I did a good brush on the first section of ties at the front. After that I started. The rail is from C&S from England and is code 80.

First I used 4 pieces of Wenz for spacing the rail at the correct gauge. They are screwed on the layout between 2 ties. After that I pushed the first microspikes in: 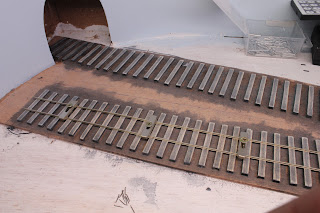 A liitle bit closer to see the spikes better. There heads are very small and hardly seen: 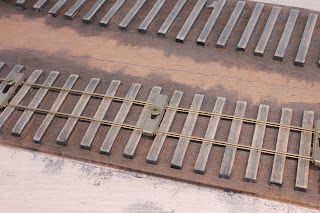 Checking again with the NMRA trackgauge: 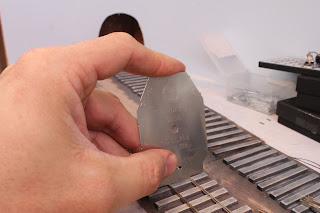 A tryout with a loose H0 truck to see if it runs properly: 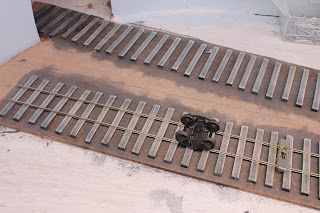 And it does. Here are 2 links to youtube. The first I did with a Shay. The "tick" you here is not from the track but from the gears...:


Both are digital but now used with a analog controller. That's way they are more difficult to control. Better control will be obtained when using a digital system. My plan is, allthough I have a Lenz system, to build in a seperate system for this layout. I do have a Piko Digi1 system with a infrared controller that will do fine for this layout. It will be a better choice because the layout will be in the Dutch Railway Museum for a 3 to 4 month period in a special exhibit about railways in wartime. This layout will be the oldest railway to show.

My wife did some more work on the Lacy hotel. It now has a roof and front roof: 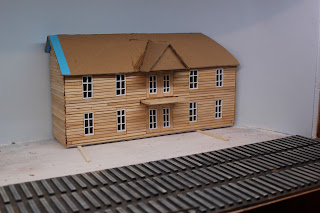 She now makes a stone chimney for the side wall and that is some work. Later more!